Could not start Server from Eclipse IDE

I have just set up the IDE as detailed by @mumfrey in his Video literally click for click using the bleeding branch and 1.8.9 branch (both had the same following result).

The problem I am getting is that I cant run the client or server and the \SpongeForge\run folder is empty. From what I understand, this should contain a run\server and run\client folder.

The console output after attempting to run the server reads:
Error: Could not find or load main class GradleStartServer

As you can see in the screenshot I have run the eclipse method and it has generated the application launch, I am able to select this from the run menu.

If I try to run the Gradle task runServer i get this:

Pastebin.com is the number one paste tool since 2002. Pastebin is a website where you can store text online for a set period of time.

If this helps anyone here is the IDE. 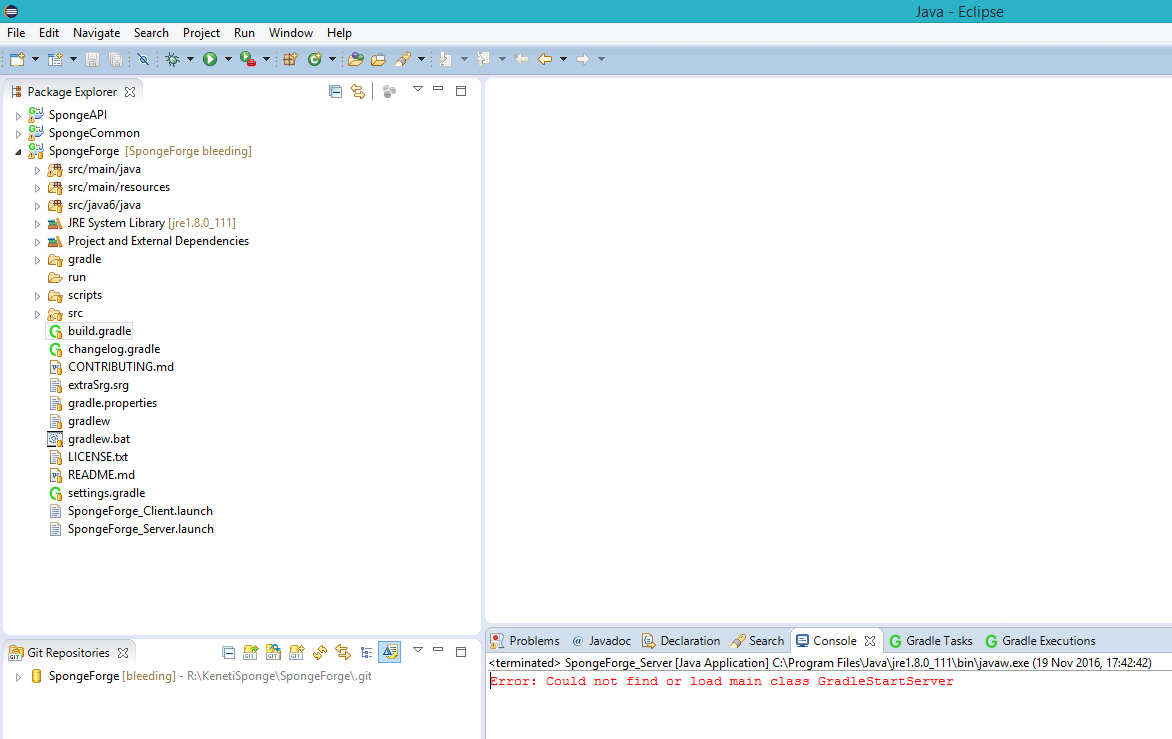 Thank you to anyone who can help me with this.

make sure you run the setupDecompWorkspace task in gradle

It means you missed out this step (running the eclipse task). Run the eclipse task (which will generate the GradleStart resources) and then right click and do “Refresh Gradle Project” again.

I did the tasks in order in the video, and each task that @mumfrey did. I missed no steps I am sure.

I’ve done it multiple times over the last two days, starting with clean environment, clean installs of eclipse and the latest JDK/JER’s with no luck.

I can clearly see the steps work in the video so it does work, it’s just having no luck with me. frustrating to the N’th degree. In the previous screenshot you can see the Eclipse launch (server and client) files that the eclipse task generates.

Still stuck with this one.

Could you try running the Gradle makeStart task? This will generate GradleStart.java and GradleStartServer.java. They won’t appear in your project, but they’ll be accessible to Eclipse (via a start folder in the external dependencies).

Not sure yet why that worked, but yeah it worked.

Thanks man. I was about to throw in the towel.