Hi guys,
I’d like to show you this plugin: 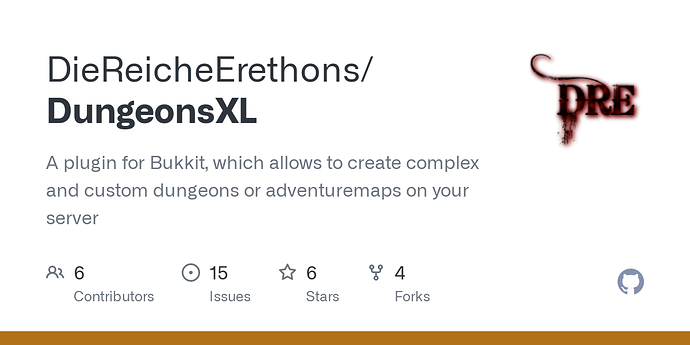 A plugin for Bukkit, which allows to create complex and custom dungeons or adventuremaps on your server - DieReicheErethons/DungeonsXL

That’s the link to the original repo. DXL is a plugin with that you can/could create dungeons or adventure maps.

In the main world, you can add group signs, a portal and so on to let players enter the dungeon together. They are teleported into a lobby where they can choose one of customizable classes to get the items they can use in the dungeon. There, they solve riddles, fight mobs (that are totally customizable with drops, strength etc. as well), search for treasure chests that give items at the main world after finishing the dungeon and try to find the end-sign.

All of that can be created in the edit mode: After creating a new DXL map, the player can teleport himself into it and gets Creative mode. Signs with trigger texts cause mobs, space for blocks to be placed and much more in play mode.

DXL copies your world from its plugin folder to the main folder when somebody enters a dungeon, so that what the players do there has no effect to the build world.

It’s also useful for admins who want to offer their players a way to work on a creative project but don’t want them to be able to take creative items to the main game.

Fortunatly, it’s an open source (GPLv3, I think) project, so I’d like to know if somebody is interested in it and would like to use it, maybe help out a littlebit or could even port it to Sponge. The code worked well for many versions but since 1.8, it has some bugs, for example sometimes, it doesn’t load the worlds correctly any more and the tutorial feature doesn’t work…

Changed the topic title to be more descriptive.

Well, I’m just asking whether interest exists and for some contributions - or hints - regarding to bugs I cannot deal with. I neither intend to transfer ownership nor to form a new team of developers. When I wrote “or could even port it to Sponge”, I left something like “with us” or so to make clear that our devs do plan to do that themselves, I just doubt this will happen in the near future

It’s not “Not Being Worked on”, it just takes ages

“Need Devs” isn’t false, but I would associate it with that we want real team members or give up ownership. Probably, it was my fault, excuse me for causing this misunderstanding… :S

Changed the title to clear up misunderstanding.

It will not be easy to port this plugin. I guess you would have to rewrite it.

The source code is really messy and not commented. Can you explain the aspects of the plugin in detail?

I would like to help, but right now I don’t have much time.

Has this project been active in the past month?

Well, I fixed a bug that made UUIDs not save properly and I’m working on a feature to use your own items in a Dungeon I need for a project, but nothing regarding to a Sponge port, yet.

I’ve created a function to have a configurable amount of lives for the players in an external plugin that kicks them out of the dungeon when they have none left, this will be directly in DXL, as well.