Can't keep up with the server

There’s my timings report. Everytime I join I can barley move because there’s so much lag. I’ve ran spigot servers before and there was no lag at all. Ever since I switched to sponge it lags a lot. Please help!

Try it without Pixelmon, I saw some issues with it

Took off pixelmon and the problem still persists. Here’s timings without pixelmon

Hmm ok, so delete your config folder (don’t forget to make a backup)

Nope. Still tons of lag and cant keep up error. 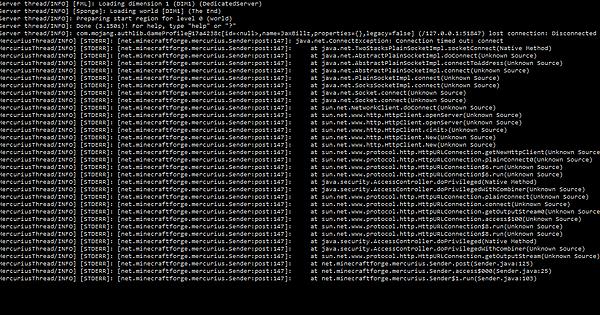 tha also came up in the console.

Ok that seems to be a network problem. Does this also happen with a complete fresh instalation of the server? Which operating system are you using?

Windows 10, is it my wifi? We just got new wifi and sometimes it can be slow. But I can go on other servers

Ok Windows hmm. I am not so familar with Windows (my last active Windows was Windows XP) since I am using Arch Linux. I don’t know if Microsoft changed something with their firewall. Have you already checked it? The errors shouldn’t caused by your wifi. Your log says that you are connecting to 127.0.0.1, that’s not your wifi card, it is the loop back network card, which is VERY fast, cause it does not need any hardware network devices to work (I knows sounds a bit weird to people who haven’t network basics)

Pixelmon is not the issue, @Eiskasten , nor is it any software issue. Windows 10 runs fine, obviously… Your first guess in troubleshooting performance is never that - always first assume that there are user errors, and checks not done. The error clearly states that the Mercurius plugin he is using is causing issues. No need to look further.

As for @jaxbillz , are you running the server on the same computer that you are using to log in? Because if so, then yes, it will cause issues - nothing that can be done about it, it’s a general no-no to run the server on the same computer as your client. Mercurius is a forge-based mod that is installed when you install Forge - remove it, it creates unnecessary clutter and can cause issues like above. You can also try setting your config properly (both in Pixelmon and Sponge) as well as allocating more memory. Plus, you are running with 4GB, and that is not enough to generate chunks.

The can't keep up message simply states that your server does not have the capacity in performance to actually upkeep it without having issues in tick time. If you need additional help, please visit our Pixelmon support here.

The log clearly states that @jaxbillz uses the same machine for running the server and for the client as the player in the log has the IP 127.0.0.1. Also 4GB is enough to generate chunks. It may be not suggested but I am able to use the server with 3GB and I do not receive these messages (I know them from setups with low performance in the past). It may also depend on your JVM settings (you can play with the GC settings a lot in Minecraft).

@Rasgnarok it is ok to run the server and the client on the same machine for testing purposes. I always setup my servers the same way and when they are finished, I deploy them to the real server. Mostly done with docker in my case.

Using a server simply to hold it for testing /= playing on a server. Besides, I need not to explain that Pixelmon is more strenuous than vanilla. The fact that in your particular case it is fine, does not imply it’ll be the same for everyone else. In this case, it could most likely be that he has not optimized his settings, and that his computer is simply not strong enough to process through MC both on client and server. Little room to debate here - Pixelmon support offers help on Discord, @jaxbillz , so I will be waiting you there. Feel free to @ me once there.