Hello,
Is there any legit clearlag plugin? Please don’t tell me CatClearLag because it’s broke.

I mean, I can name at least 30 servers who use it and I haven’t heard of any issues. If you think it’s broke, then send a message to the developer to let them know - it’s not only faster to fix a plugin (if there is a problem), but the developer should be made aware of any issues as well.

A plugin to assist in removing lag from your server.

I’m using 1.12 atm so it’s pretty bad, people keep losing items from crafting tables because of the clearlag, you can not add any items or hostiles to the whitelist etc. The dev doesn’t give damn about his plugin, i tried to talk with him or ask for help but what he did was blocking me from Discord so i really give up from that plugin

I’m sure there’s more to this story then is being shared, so perhaps @TimeTheCat can weigh in to clear things up. I feel by your tone that you were sounding aggressive and accusatory, so I can understand why he would be irritated by that.

Please understand that virtually all of the plugins on Sponge are made by people who do this in their free time; this isn’t a career for them or anything. I see that there hasn’t been a release of CatClearLag since before the official API 7, so it’s understandable that there might be issues. That is not, however, an excuse to be impolite to the developer or state that he ‘doesn’t give a damn about his plugin’.

It is entirely possible that the plugin has been put on hold or discontinued due to time (no pun intended) constraints. If this is the case, then I would say a new (or at least updated) clear plugin is a reasonable request - CatClearLag is licensed under MIT, should it should be pretty feasible for a developer to make those compatibility updates if they’re so inclined.

This was not, however, implied to be the case based on the original post. You’ll make it further and have better responses by being friendly and cordial rather than being critical of someone. 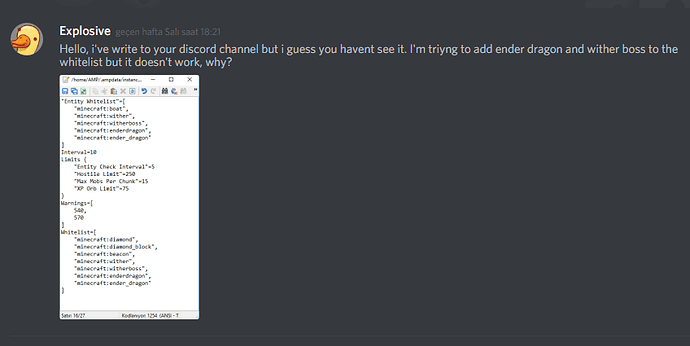 It’s literally what i wrote to him then i get blocked then i write the same to his discord channel and hep ignored me or anyone else, i’m not being aggressive, it’s just the truth

Also for some reason it broke my chunks example; people can not drop items in some chunks

I’ll give it a shot, thank you!

Are you sure that they actually blocked you and don’t have direct messages turned off for non friends?

Also using Discord to report bugs is generally a terrible idea, as I said, things get lost within the chatter. As a rule, if they have a Github, ALWAYS report bugs and issues on there.

Sorry for the very late answer, lol and yes i’m pretty sure they’ve ignored me. I’ve asked my question nicely and kind, i haven’t spam it i asked the question first in his discord channel. I’ve wait like 3 days for the answer so i wanted to try my chance in discord pm but it didn’t work as well. I don’t like to say that but CatClearLag’s developer doesn’t give a s**t about his plugin and users, i’m like really sure about it.

You know if they’re anything like me, they can do days without using Discord. Frankly, I’d be much happier just sticking to IRC + TS.

I’ve had a look in their Discord and I see no evidence of them ignoring people. I saw this one guy spam them about an error… Which should have been reported to the Github issue tracker. https://gyazo.com/30d87b15ff3d3cd58ea2188d45741298.png
I mean… Who does that? It’s so rude. Not everyone has the time to check and reply to everything within 72 hours.

Anyway, moral of the story: If you want your issue seen, use the Github Issue Trackers. That’s what they’re there for.

I haven’t spam anything, it’s not me, my discord name is Explosive with a yellow duck drawing profile picture