Ghello spongies and sponge-plugin-devs i’m here to request a bunch off plugins or features for 1 plugin!

Everyone loves Gambling right? so i came up with this:

Dice: Everyone who played runescape know’s the dice bags! this time i dont want to see Dice Bags

It would be cool to see npc’s being the host off this Game for information: 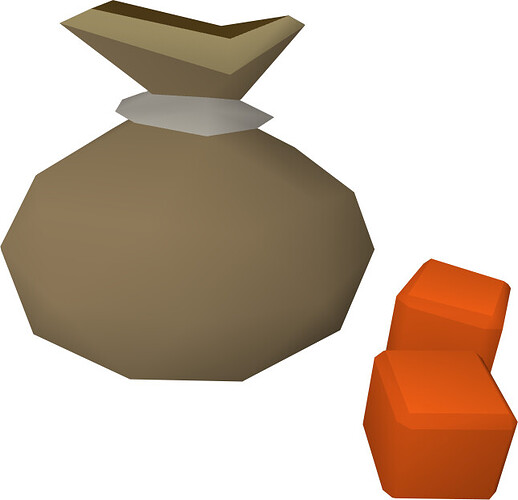 A dice bag contains dice. It could be purchased from Faruq in Al Kharid for 10 coins, but it has been removed from the game due to complaints about "dice games". On 15 November 2011, the rolling feature of the dice was disabled and the bag was fully...

So i want the user off the plugin being able to choose out off those options:

Next that i want to request:

Again:
An NPC should be hosting this

A user places a bet same as on the Die’s then chooses weither Hot or Cold then the npc sais the outcome to the user who placed a bet,

also for the way off the betting the builder off the gamble game should choose out off all options shown above then lets say for the Dice the owner/creator of that gamble npc chose 55x2, Then he has to chose
The min and max bet wich can be placed example: 5K (5000) as min and 60K (60000) as max when the user did place his bets for example 50K (50000) and the dice goes above 55 then the bet will be paid out x2 wich makes us calculate 50Kx2 = 100K

Hope someone is able to do this

That would be cool, I suppose.

You could make it a little more abstract; have the ability for players to make a “gamble”, name the condition or the moderator, and then bet amount. The other party(s) could then accept/deny it, and thus moves forward.

Conditions could be dice, a statistic (deaths/kills/etc. from that instance forward), etc. Or, again, it could be “hosted” by a “gameble moderator” which would then hand out the victory to whoever “wins”. (And could possibly get a 5% cut or something

willing to see something like this appearing in a plugin i made a program like that in ahk but wtf ahk and minecraft? whats the point of having a ahk script doing stuff a plugin can do better?

make a gamble rank for donators to held gambles

Just so you know, that’s against the EULA. The only things you are allowed to put for donators are cosmetics.

Anything that gives players some kind of advantage over others is against the EULA, whether other servers do it or not.

Yes, that is against the EULA, regardless of what other servers do. You can allow the sale of cosmetics, you can use a paid whitelist for the entire server, you can allow one person to buy a noncosmetic if everyone on the server gets it as well at the same time in the same way. Anything else is illegal. Have a read of the ‘server monetization’ section here.

why making a problem out off it that where just ideas -.-

Because the law is important, and we don’t want anyone to get in trouble…

ok i came up with some new ideas:

so there are 2 options either both can be used

same for the hot/cold

then the GambleHost has to type /hc start

then both receive a message with the outcome