I wish.
I’m on API 6 and don’t see that.
I figured I can do .get(“HitTarget”, BlockSnapshot.class) on the cause.

Uh, it’s right in the docs. TargetBlockEvent#getTargetBlock, and InteractBlockEvent extends this.

I can only get it out of the Cause. 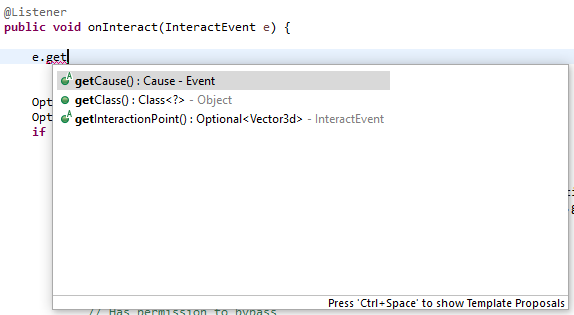 I’m only using it temporarily to protect islands in my plugin until I finish every event listener.

But what are you trying to listen for? If you’re listening for block interaction, then you would use InteractBlockEvent. InteractEvent is pretty meaningless on its own. And InteractBlockEvent is the one with getTargetBlock.

It’s just me temporarily cutting corners. It just listens for every interact event. Then it checks if it’s a block interaction event by looking in the cause for HitTarget. If that isn’t present then it uses the InteractionPoint.
Then the plugin checks if that location is an island and if they have permission to interact…and so on.

Pretty soon I’ll change it to listen for every event from block interactions to opening a mule’s inventory, all toggle-able from the config file, but for now I’m just giving quick, and simple protection to islands.

You’re right. There’s plenty of ways to do it, but this way already works, so I can’t change it until I do the new system.