WhoWas simply gives you the ability to get a player’s previous names. It is thus a very simple lightweight plugin with just a single command and no configuration files.

Use /whowas to get player’s previous names and when he changed them.

Get the Lastest Release

Excited for this
It works, just a bit sloppy in my opinion.
I’d suggest maybe making it listed on separate lines instead of a paragraph you need to rummage through.

I also feel like saying the user went from {name} to {name} isn’t needed and redundant.

For the example above ^^, it would be nicer to see something similar to NameMC.com 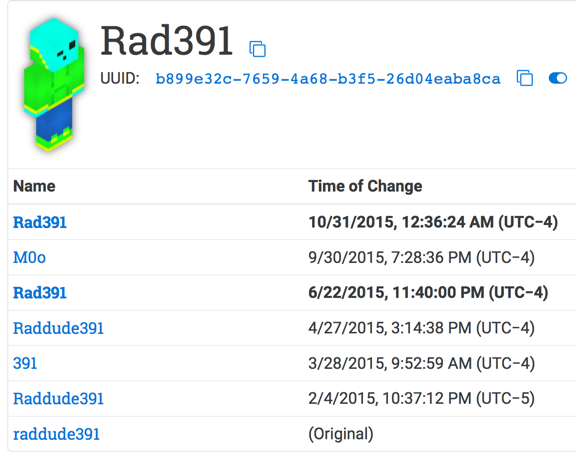 Well @Aaron1011 had once made a plugin with the same function and the same name, but it did not get updated. Good job @Arckenver!

@Ren I agree on the display thing, I’ll update the plugin soon

@liach Oh yeah I forgot he named his plugin WhoWas and I thought it was just for bukkit. I should change the name of mine then !

I honestly highly liked the name, but if you need to change it obviously do so.
/whowas was perfect in my opinion and went well with Hassan’s essentials /whois

None the less, great work!

Don’t worry, I can just rename mine

I may update it at some point, but I don’t want to sit on a plugin name that someone else is using.

You’re fine continuing to use the name ‘WhoWas’.

Thank you very much. I’ll do my best to honor that name

and always get it up to date.

@Ren, could you provide me a sample screenshot of the in-game command rendering as you did with username Rad391 ? Since there’re lots of name changes, I think this should be a good picture to put in the post.

Here you are good sir;

Issue still existing when trying to fetch user’s who have never connected.

Rani is the individual who has never connected.

No errors in console -

Hmm I don’t get that issue when trying /whowas Rani

Does it do it for any player that has never connected ?

lmao.
I uh… may have missed that plugin when updating and was still on 1.1 :>

Thanks for testing it though