I’m having a little trouble with the Pagination Service with Version 4.1.0 - the last line in service .sendTo(MsgReciever); Doesn’t appear to work.

Any help would be appreciated

My code on Github

Please be patient with me, I’m very new to this.

I think you may have not pushed your most recent code to github, as this doesnt include the sendTo() method. It just builds the pagination and then does nothing with it.

It’s not there because it doesn’t work lol

What happens when it is in the code? Does it throw any sort of exception? Is it a syntax error? Does it just not show anything on the player side?

A little more context is needed

I get Java errors before I even build it,

I’ve tried all of the following:

You need to build the pagination builder first, like so

Also, you shouldnt re-use your builder in the third image, grab a fresh one from the pagination service every time you need one.

I already had that, it was just above, even after moving it down it doesn’t want to work 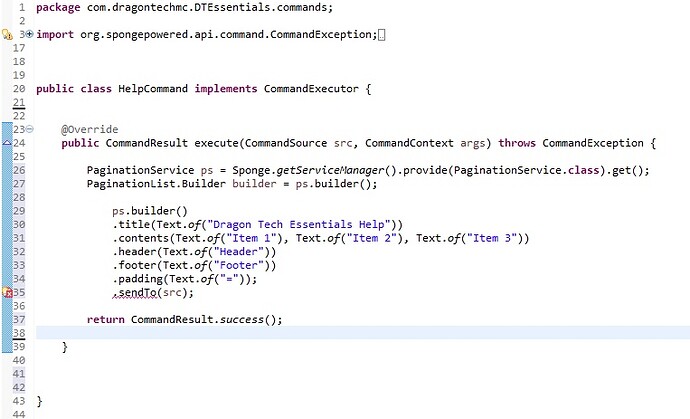 I also tried using .build().sendTo(src); but that just moves the error to the .build()

In that screenshot, you’re still not calling build() on the builder object.

Also, check line 34. You’ve got a semicolon there preventing you from acting further on the object. If you remove it, the next line will tell you that the builder doesnt have the method sendTo(). You need to remove the semicolon on line 34, and replace line 35 with “.build().sendTo(src);”

That semi colon was the problem

Thank you, I appreciate your time