I don’t think there is one out right now… can anyone make one? I would pay you if I had money… perhaps I could buy you a coffee or beer?

I used to use bPermissions, and normally I prefer to edit the files as it allows me to copy paste stuff in, and bPermissions was simple as hell anyway. IDK if it’s because I’ve been out of the game for so long, or the fact that PEX2.0 does not have comprehensive documentation, or even the fact that the only time I get to work on my server is late at night when I’m burnt the hell out, but whatever it is, I can not seem to wrap it around my head.

I tried using PermissionManager, which is good and has a SORT of in game UI (still doesn’t let me bulk paste perms, etc) but a lot of plugins (like Enjin, GriefPrevention) ask for PEX expressly, so I need to switch over to PEX.

Any way someone good at programming could code one? I would help you test it the whole way, and will be eternally grateful…

Thanks for reading… sorry that I’m so overbearing…

The main points that make pex hard to use.

Apart from when the above or some other small bug bites me, I’ve found it’s had a lot of thought put in to try to make it easy to use, it just needs a tiny bit more polish then I don’t think you would hear anyone complain about it on the forums again.

Most of the reason why plugins ask for pex specifically is they either have the pex commands / pex API hard coded into them, or it’s because PEX is the only permissions plugin that they know of that accurately accounts for Sponges Context system.

As for a GUI for pex, the closest thing I can come to is using a json validator or editor in order to edit your files, even though it’s not recommended.

This will cause it to not only validate your json, but attempt to also validate that the contents matches what pex is looking for.

Cheers man, I was actually looking up JSON editors as I wrote up the OP.

If the PEX creator would upload an example perms file (not a schema) then I could use it in combination with a JSON editor and with the schema to make my perms files.

The big issue with pex for me is that you have to enter it line by line through minecraft. This also means deleting them is the same, and it’s just a pain… consumes so much time. If it were YAML it would be easier (for me) simply because I could directly edit the files.

Anyway, who am I to complain, the PEX creator has obviously done a lot of hard work to make it the best perms plugin for Sponge currently, so I’ll just try my best to use it. However, the offer still stands… I’ll buy a coffee for anyone who makes a GUI for it.

I recently added a permissions GUI to my ChatUI plugin that you may be interested in. 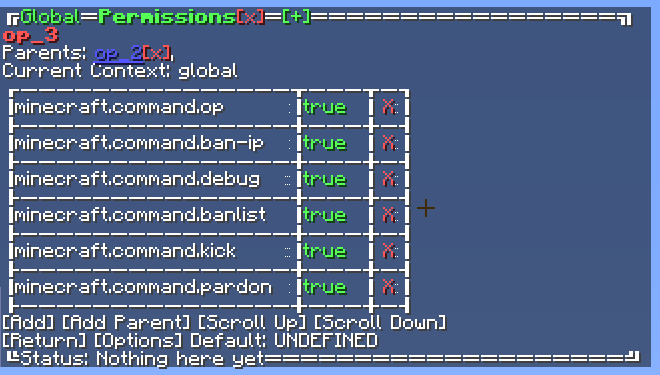 Maybe this helps at least a bit?

i do it this way: first made the groups inherit each other: pex group <groupname> parent add group <parentgroup> example: pex group vip parent add group guest then i add the groups from above to the ladder: pex rank <laddername> add group <groupname> example: pex rank default add group guest I repeat this until i have all groups inherit from each other and until i have all groups added to the ladder. I can now promote/demote users on the ladder: promote user <user> and demote user <use…