PixelmonOverlay - Gives plugin access to the pixelmon overlay, and provides some useful features like broadcasts and such

This is a discussion topic for the Ore project, PixelmonOverlay. View the full project on Ore for downloads and more information.

This plugin lets you send preconfigurated announcements through the Pixelmon’s Notice Overlay (topbar). 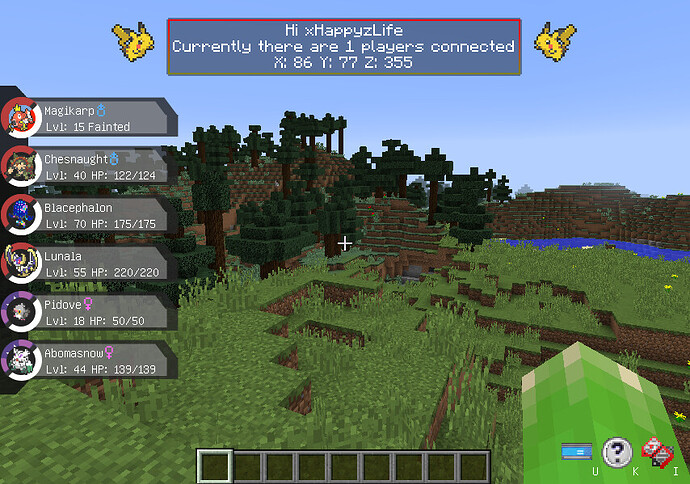 PlaceholderAPI is supported but optional. However, you won’t be able to retrieve any information without it, not even the player’s name.

broadcastInterval (defaults to 300 seconds) sets the interval after which the announcement will change.

silenceInterval (defaults to 300 seconds) sets the time to wait between two announcements. Set to 0 to disable.

announcements contains the ordered list of all the (guess what?) announcements. They will be shown according to their position in the list.

I fixed a lot of stuff, but also implemented new bugs😅. There are some problems with the colors of the window, I’ll fix them for Pixelmon 7.0.4.
However, you can now use any kind of item and pokémon, as long as the client knows how to render them, and scale has been removed, you can change their size through the growth’s pokémon spec, like gr:giant to make them bigger, and gr:microscopic to make them smaller.

I split the plugin to api and implementation, and now other plugins can use the Pixelmon Notice Overlay to show off messages and custom announcements.

This might seem confusing, I’ll update the thread with the link to the docs as soon as I finish writing them.

Thanks to GT86 for sponsoring this plugin.

are we able to use clickable links in the overlay?

No, an overlay is not a normal gui, there’s no mouse

Add command to make announcements on the fly please?

Read the github. its already planned.

Great plugin!
How should I go about configuring legendary/shiny spawn messages? Can you give me an example?

A new version has been released for PixelmonOverlay, it is available for download here.

Some classes where refactor in Reforged’s newest update, this release aims to fix those incompatibilities.

There’s also a WIP feature. You’re able to use /pixelbroadcast <id> and show everybody the desired broadcast from the config.

<id> is the numerical id. The first announcement in the config is going to be the number 1, for example.

This is part of a bigger feature to make announcements on the fly. It’s pretty much already done but it requires some minor refinements, so I decided to delay that to let everyone else update asap.