Exciting news all! At long last SpongeVanilla 1.18.2 experimental builds have been released and we have a rollup of the other progress we’ve made across the project. Once more I’d like to thank our sponsors, which you can see from our front page and the donors who support this project, along with all our contributors and community members for their much appreciated contributions to development and support.

As API 8 has been available for some time, we have added further features that were not provided for in the core specification and we have now released API 8.1

. Some important additions include the following:

1.16.5 SpongeVanilla: Progress towards a reference build is ongoing, though we are becoming increasingly satisfied with the stability of our 1.16.5 implementation. SpongeVanilla implementation will continue as we implement more of SpongeForge. However, we know some of you are running SpongeVanilla for testing your plugins, or just because you want to stick with 1.16.5 for a while! We are still interested in fixing issues you find, so please continue to let us know if you find issues with SpongeVanilla for 1.16.5!

1.16.5 SpongeForge: We have seen an increase in server owners choosing to run SpongeForge for 1.16.5, which is great to see! Some issues have been discovered and we have moved to fix them when we can, thank you to those in the community that are identifying issues in SpongeForge! While progress is still behind that of SpongeVanilla, we are still aiming to provide long term support for SpongeForge 1.16.5 in line with Forge’s LTS.

We need people to continue to test the builds and let us know what is missing. Because of the changes Forge makes on top of Vanilla, some of the patches that we apply to support Sponge in Vanilla Minecraft don’t work on top of Forge. Additionally, with the way events work in Forge, some of our events may not fire - please send us an implementation request if you come across this.

If you find issues, please let us know using our issue tracker on Github!

We have now released SpongeAPI 9

! API-9 is an incremental update that builds upon the foundations of API-8 with some tweaks to better reflect the state of Minecraft today.

There are some minor breaks, including:

However, we expect that our current API will have to be changed or removed for 1.19 and that will become API-10. Developers that wish to develop plugins that interact with world generation may wish to consider using our VanillaGradle and Mixins toolchain and use some of the decompiled Minecraft classes directly, if you find that our API is insufficient for your needs.

We would rather not see world generation APIs break on every version - and so we are assessing what can be sensibly abstracted, and will add new APIs when we feel that the Minecraft codebase itself has stabilised a bit.

Some of the changes can be seen in the commits below.

Tags are no longer a registry type 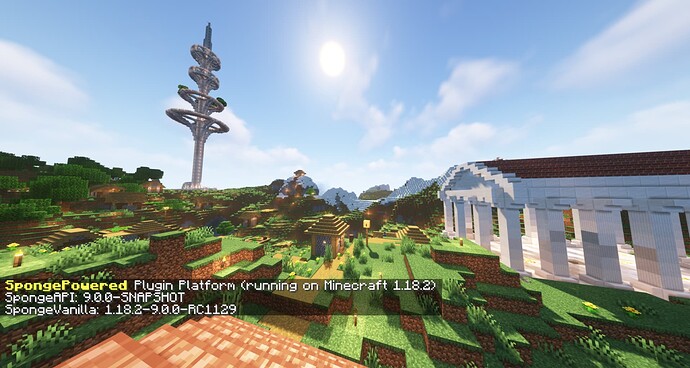 1.18.2 SpongeVanilla Experimental Builds are now available for testing.
Due to some significant code changes made by Mojang between 1.18.1 and 1.18.2, it has taken us longer than expected to begin producing these builds. For those that tried playing the 1.18.1 builds, there shoudn’t be any noticible differences when moving to 1.18.2, if there are and you don’t think they are expected, please let us know!

As we move ahead with SpongeAPI 8 and 9, we are transitioning SpongeAPI 7 to a more community based support and maintence model. We will eventually be ceasing all our support for Minecraft 1.12.2 and SpongeAPI 7, and unless there is another urgent security issue, we will not be issuing any more Recommended Builds for Minecraft 1.12.2, as we just don’t have the time or manpower to continue to support this alongside our 1.16.5 and 1.18.2 builds.

However, we know that 1.12.2 still holds value in the community. We are still happy to review and accept PRs from the community that are sensible, even after we end our official support, and such builds will be available via our downloads site. Indeed, some good patches have come from our community, including this patch that added protection from an exploit, fixing broken pickup events and fixing experience calculations in certain scenarios - and we are keen to see that continue.

In line with our earlier move to a flagging process from the prior approval process on Ore, we have removed the warning interstitial on plugin builds that have not been verified. As a reminder, please be aware of the potential risks of downloading and running third-party programs on your systems and inform Staff if you find suspicious or malicious code so that we can further review and take action if necessary.

To celebrate the release of 1.18.2 SpongeVanilla experimental builds, we’d like to host another community get-together to discuss the current state of affairs and the ongoing development efforts. Rather than putting on a big song and dance, we’d like to hear from the community, get your feedback and answer questions as best we’re able.