Hello all, couple of things to share with you!

We are pleased to say that we’ve passed our 1st June deadline for any significant breaking changes to API-8, a significant milestone in our march towards Sponge for Minecraft 1.16.5. There has been some confusion in the community about what this means, so let’s clear it up!

As of now, unless it is important for the implementation of the API, no breaking changes will be made. This means that plugin developers should be switching their focus to API-8 and making the changes they need to be able to test against our API without fear of any significant change.

We believe we may need to make minor breaking changes to the Registry API (to make it easier to grab items from it) and the Volume and Schematic API (to support v3 of the Sponge Schematic Specification). Beyond that, we are not expecting anything to break for our users and we will complete the freeze of our API, all being well, early-ish in July.

Once we hard freeze, we’ll release the API as a release version, at which time we’ll ensure that SpongeVanilla is availabe in a beta form - but if you want to try SpongeVanilla for 1.16.5 now, you can grab the latest builds from our Maven repo.

Remember, these builds should be considered unstable, back everything up before you use these!

Get SpongeVanilla for 1.16.5 here, we recommend that you sort the list by version, and then select the latest version at the top - you will then need to download the “universal” jar to get going. We are in the process of completing our replacement download indexing software, SystemOfADownload, we hope to have that up and running soon to make it super easy to access these builds in the future.

An Update on SpongeForge for Minecraft 1.16.5

We are also aware that a lot of you are chomping at the bit for SpongeForge, we have started working on it! You can follow progress on our efforts in getting Sponge and its plugins loading on Forge in the Sponge repo on Github (now in the forge sudirectory).

However, as we have always said, 90% or so of SF is common with SV. If you want SF, help us out by testing SV and making sure we have the core mechanics right - just play about a bit on SV and let us (and plugin devs, if a plugin you’re using is acting up!) know what’s wrong in the normal way.

The SpongeVanilla and SpongeForge repos will remain up for our API-7 branches, there are no plans to merge the repos for our older API versions.

Saving the most exciting news for last, thanks to the hard work of our Sponge Devs, especially @zml and @Morpheus, we are thrilled to announce that we have produced very experimental builds of SpongeVanilla for Minecraft 1.17 on the same day 1.17 was released! 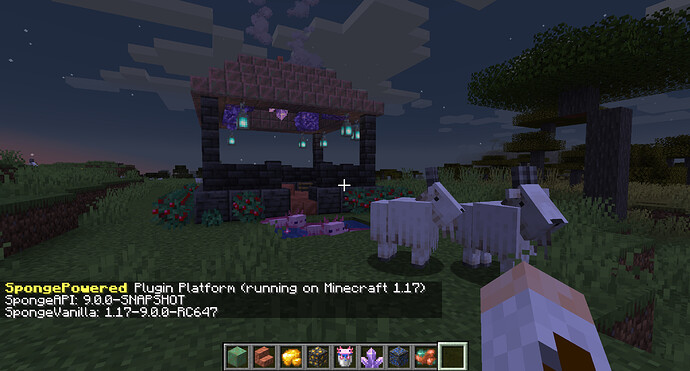 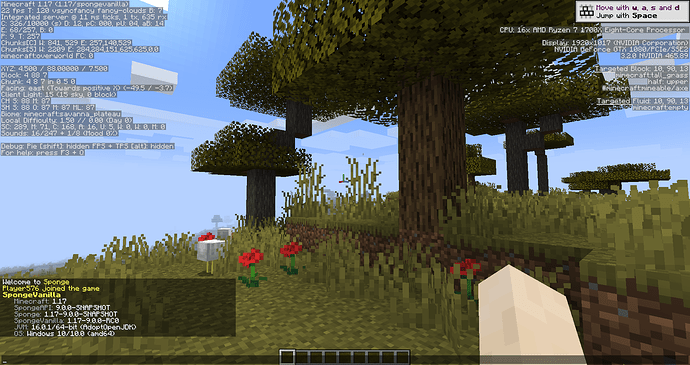 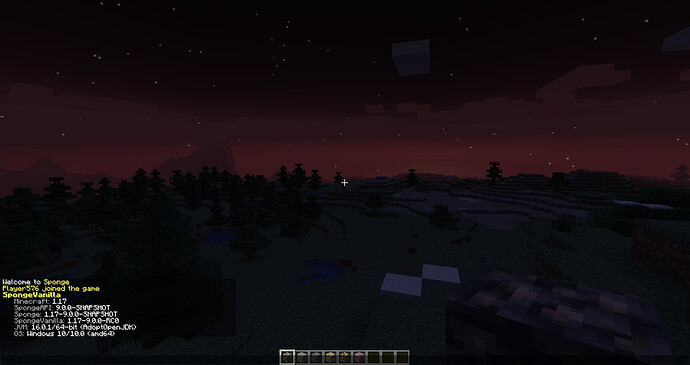 As you might be able to tell from the screenshots, Sponge for Minecraft 1.17 will run API-9. Version 9 will be very similar to API-8, except API-9 will include, entities and blocks and other features that 1.17 provides. While we do not expect many breaks between API versions 8 and 9, API-9 is not frozen and so if you have a breaking change that missed the API-8 cutoff, consider targeting API-9 instead.

While we have very experimental builds being published to our Maven repo, these builds are even less stable than the 1.16.5 builds and we know there are some significant issues within them. Nevertheless, for the curious and the brave (backup backup backup!), these builds can be downloaded if your interest is with 1.17.

Our focus remains with completing API-8 and releasing SpongeVanilla builds for 1.16.5 before we turn any serious attention towards 1.17 (don’t worry, we’re still going to make sure we get builds for SpongeForge for 1.16.5 out too!). Our ability to run against snapshots and pre-releases enable us to achieve day 1 builds, and this will have a significant impact on our update speed for future releases of Minecraft, including the upcoming Caves and Cliffs Part 2.

Edit, 26th August 2021: Updated the link to the Forge branch on our repo to just point to api-8, as we have now merged our Forge branch into our main branches.

Why do you not update the experimental builds on your website?

The most people look there first and think “wow, 3 years old builds, the project ist dead”.

Well, I check sometimes the websites and read the news, this is this first time I see a new precompiled build. Could you update your website or make a link directly there to the repository?

I think this would help your project to get attention.

We’re working on it, our downloads site indexer has failed on us and we’re having to build a replacement. We hope to have it up soon.

Hello there,
Tkx for all your effort and with my greatest respect!
Sponge is the best server core I’ve ever used, and I completely agree with Himijimmy, since I’ve been checking sponge release in your download page but for a very long time I found nothing new at all, even once I thought the development may have been stopped… Such spoose made me really sad

Well today I finally found this topic on new development progress, nothing could surprise me more pleasantly

As a small advice, you guys may consider update the alpha builds onto the download page and, with LARRRRAGE Warning about its possible instableness. Experienced server builders will take it carefully, while other ones will then know that sponge is still under further development to higher minecraft versions.
Best Regards,
Equi