The one about Bacon

So I like bacon, and I bet you like bacon. This thread is for all the bacon lovers to talk about and post sizzling bacon pics!

As a reminder to others, I don’t think we want to see any NSFW pictures posted.

Ok here is some safer bacon

Bacon is looking a bit too thin for my liking.
You need some proper British bacon

You want thick bacon? Fine have some American Steak Bacon

But that’d technically be just a pork steak right

I figured that should tide some people over. 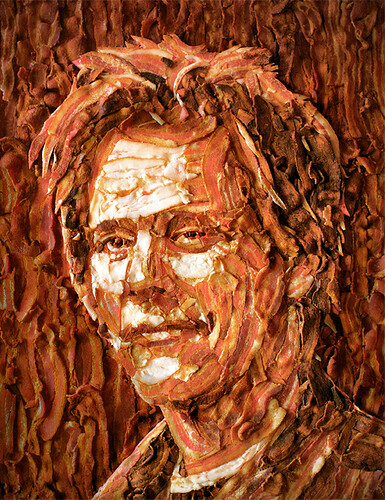 Portrait of Kevin Bacon Made Out of Bacon

For his ongoing celebrity portrait series, San Francisco-based artist Jason Mecier has created a meaty portrait of actor Kevin Bacon out of bacon. via

I’m disappointed in you.

Not quite but close, would be called bacon with a one letter typo.