This is a discussion topic for the Ore project, Composer. View the full project on Ore for downloads and more information.

Composer is a full featured note block music importer and player. Import Note Block Studio files by placing them in the config/composer/tracks/ directory and the plugin will automatically load them on start.

Composer comes with a full music player built in as shown below. There are commands for each action you can perform within this menu as well as the text itself being clickable. 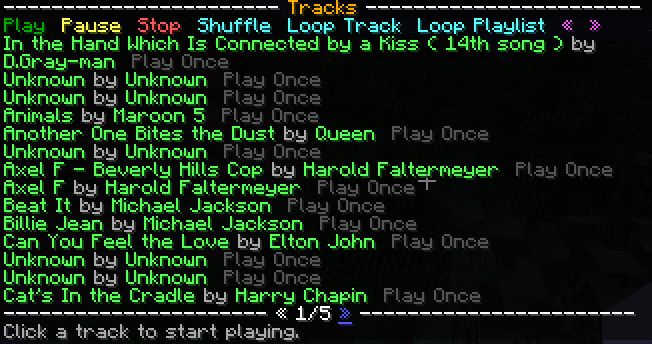 As of v4.1.0 Composer support playlists. To use playlists enable the option in default.conf

Change the config option to the playlist name.

Note: The -p lets you target a player other than yourself.

Hi, I have 2 suggestions

Hello, I’m a user of mcbbs. Could I reprint your sarhatabaot on the Forum

I will mark the original author and clearly mark your original post on the forum. Our Chinese forum website is www.mcbbs.net

hi this plugin plays the sound in all the map ? and can we put a sound ourselves and add the sound to the whole map with a command block ?

The plugin plays for each user independently.
You can add your own tracks by adding a .nbs file to the folder.

Hey! I was wondering if it’s possible to have an option to stop playing after the song finishes? instead of going to the next.

Thanks for this!
We want to use this for an RPG-style map but it plays all of the songs in a list rather than letting us specify which one to play by using the command.
Is there any chance we could get the ability to put the .nbs files in a sub-folder to specify the “playlist” built-in? Or at the very least, an option to put one song on loop rather than go down the entire list.

Thanks! I really appreciate it.

You can now create playlists by add sub folders to the “playlists” folder.
The playlist name is the folder name.
You can also create a default playlist through the config.

Thanks to @KonohaDaze & @SnowBlitzz for the ideas for the features added in 4.1.0

wowow thank you so much for the update!! amazing work!