A small update - Without fully implemented inventory api i cant do much work, so i decided to start a small sideproject.

The bad news - I havent found a way how to display readable skilltree inside minecraftclient (without mods)
The good news - im working on an extension which will fix this issue.

Details:
The extension contains a webserver which is used to provide a rest api. Currently i embeded jboss’ resteasy which wont be used in the final version (too much dependencies). It will be replaced with something smaller eg apache/nanohttpd … im still looking for some alternatives, im also very lazy so i would prefer something what implements jsr311. (And i also hope forge lets me load a javax. package, sometimes i found forge quite stupid)

The frontend is build on http://www.cytoscape.org/ and jquery

The communication is based on oauth standart 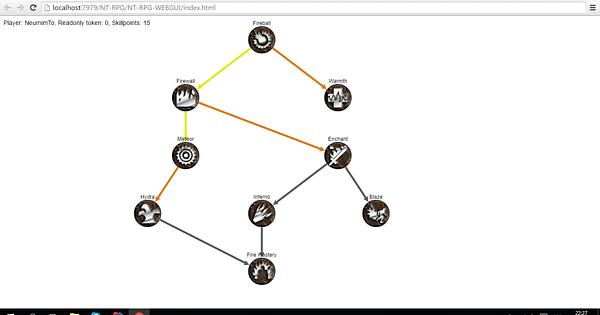 (icons are taken from game diablo2)

Basically player logs in(mc server) and opens a website, where he fills a login form (name, server url). Once the form is submitted the player recieves a server message ingame, which contains his token (± 10 chars). Player has to write the token into another form on the website. Once its done server sends data which contains a skilltree, and some more stuff such as icon urls, avalaible skillpoints… Once the graph is built player can interact with the tree - hoverering mouse over icon displays more detailed information about skill, leftclicking on an icon makes player learn a skill and the action is immediantly displayed ingame.

Nice plugin. Many RPG plugins like McMMO and Custom Enchants and things like guilds and races. This plugin is the best plugin on Sponge and Bukkit so far for RPG. So much greatness

nice plugin. I hope you can accomplish it .

sure i can (:.
Currently im fixing some bugs, and improving the plugin flexibility. Before i post beta version here(ore repository) sponge has to add events for toggling on and off dualwielding. Last time i checked it has not been finished yet.

This means you did not setup hibernate correctly (=persistance).
It seems you installed NTCore, however connection to your database is not correct.
Check file sponge/config/ntcore/database.properties

see https://github.com/NeumimTo/NT-RPG/wiki/Setting-up-a-database - for more informations. If it wont help post here type of database you are going to use. It may be a bit tricky to setup Hikari cp and Hibernate together, for every database you will need a little bit different config file ( eg.: package of jdbc, …).

Also which version of plugin are you trying to use? Currently you have to build from source … branch 1.0.4.
Github releases which you can download are not up to date.

Yeah I followed that guide pasted H2’s dialect and made sure it had create in next line
this is my whole database properties file and I am trying to use H2 as storage
http://pastebin.com/AdZG1yC5

And yes I was using Github releases, will build from source and update you on how it goes

Thanks for the quick reply

you will need to set values username, pw and datasource to match your server

EDIT: Uhm I do not see Gradle anywhere, do I import to IntelliJ then build? sorry for the noob question, just starting out

Thanks, will try the above mentioned and compile again later today
Also tried looking at all the classes lil bit and wow I see so much more than I originally thought this Plugin had… Hats off

Ok sorry for making this seperate post thought should do that since this is post-startup stuff, So after following your config got it to boot, many commands just don’t give any output, which I am guessing since under development so that’s normal. This appears randomly in the console a lot http://pastebin.com/02AvRs98 just thought I would share.
I did create a skill tree and class as mentioned in config but it doesn’t seem it appear when done /show classes, a known bug or m I just being stupid somewhere? it does bring up an empty inventory
Also trying to learn the Javascript part on the wiki, if I make any progress will update you on how it goes
I don’t know if you would call a daily 10 players server decent player base but will do what I can to keep you updated on how it goes

really loving where this is heading

This appears randomly in the console a lot http://pastebin.com/02AvRs98 just thought I would share.

Im aware of this. files which contains settings for mob health/damages are not generated on startup, if they missing. known bug

I did create a skill tree and class as mentioned in config but it doesn’t seem it appear when done /show classes, a known bug or m I just being stupid somewhere?

this feature works. its probably configuration issue. Could you post .conf files

Also trying to learn the Javascript part on the wiki,…

There are some examples you can find in a file examples.js

This file has been truncated. show original

i did not had any time to finish upcoming changes and bugfixes today. ill release 1.0.4 in a next few days

Apology, I said Skill tree and class as mentioned in config… I meant mentioned in wiki, made these two files
AClass.conf and ASkillTree.conf by using stuff provided in wiki and copied them to classes and skilltrees folder respectively and no I do not plan on using these just added to test how they working
here are the two files http://pastebin.com/FXTSNzap http://pastebin.com/T9WBVERA
and for the js files where exactly is this scripts folder mentioned in the wiki? if its inside plugin sources I have no idea how I can add them there, I couldn’t find a script folder nor a main.js file in config which makes sense since don’t think javascript files appear in config unless I am being dumb
as always thanks for the quick reply

also is there no permission nodes for commands? currently, everyone can use all commands and since the thing where this is used is not open publicly dont want players to use these commands
and don’t worry about the update can wait some days no issue

also, forgive my English not a native speaker
EDIT: I am dumb,
gonna copy the main and example js, create a new folder called scripts inside nt rpg config and paste there to test

the folder for scripts is located in

also is there no permission nodes for commands? currently, everyone can use all commands and since the thing where this is used is not open publicly dont want players to use these commands

im also aware of this. it broke during some sponge api update 4->5 ill have to recheck permissions.

the folder for scripts is located in

Created a new folder called scripts there pasted the example js restarted still doesn’t recognize skills.
Also you got any examples of how default classes and races config files should look? with some classes and races in it? maybe the config you are using if you are fine with sharing it

Awesome really excited for this

Thanks again for making me this and keeping me updated

Created a new folder called scripts there pasted the example js restarted still doesn’t recognize skills.Also you got any examples of how default classes and races config files should look? with some classes and races in it? maybe the config you are using if you are fine with sharing it

Theres probably warning in your console that nashorn wont be loaded.
Nashorn is part of package which seems to be excluded by the modloader… from some unknown reasons.
See https://github.com/NeumimTo/NT-RPG/wiki/Administrators-guide how to set it up…
if you have access to su on your server symlink should be enough.

Alright will do that thanks!

I use it and it does