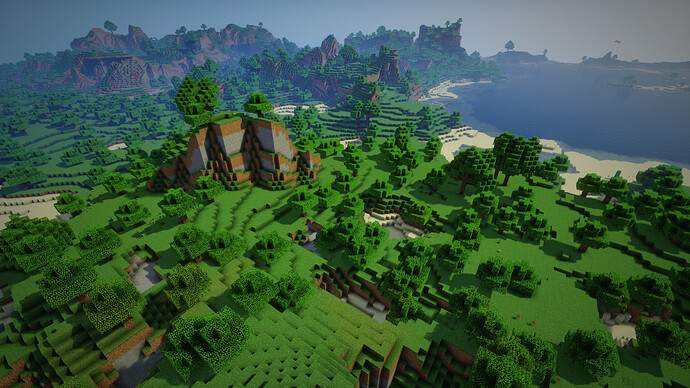 NostalgiaGen brings the awesome old Minecraft generators to your Sponge/Forge server. If you have an old world seed from the early days of Minecraft Alpha or Beta you would like to play on again this is now possible! NostalgiaGen generates worlds usually 99% identical with the original Minecraft world when using the same seed.

Note: NostalgiaGen is still in development and may not always generate the world properly. Please always see the known problems for details.

Yay. Now I can ditch the shitty world gen that Minecraft provides

Added a compiled version. Should mostly work, although read the known problems carefully before using.

Fixed the problem with the animal spawn by adding simple mapping of the old generated world to the new biomes. The old Alpha worlds didn’t have biomes so the biomes chosen for a certain coordinate depend simply on the heighest block at a the position:

This will make animals spawn properly again in the forests. The biomes used by the plugin to generate the world can be chosen in the configuration, just keep in mind once the world is generated nothing will change until you regenarate the whole world.

Added Minecraft Beta 1.7.3 world generator (generates the same terrain as all versions from Minecraft Alpha 1.2.0 up to this version, only trees or ores might be at different positions).

The biomes used in this generator are not all available anymore, because of that currently these mappings are used (The biome mappings can be changed in the configuration):

Biomes marked with * are up for discussion, if you have an idea how they could be mapped better just post it here in this thread.

See the main post for an example how to create a world using a world generator modifier. This has the advantage that you can now create mulitple worlds with the same generator.

When the Alpha / Beta world generation were replaced by the new b1.8, There was a huge sadness for me. And you’re one of the rare skilled modders who could make these nostalgic plugins, like Ted80 (OWG/RWG/FWG) or Barteks2x (173generator).

So I think you’ve done a complete part of Sponge world generation plugins.
If you can keep it updated this would be great !

And if you need any help you can ask me ! (Don’t trust me I can’t remember a java lesson)
In short, THIS IS AN ENCOURAGEMENT good luck to you !

Do you plan to implement villages and strongholds? I think villages could be great in 1.7.3 gen.

Making the Alpha/Beta generation extendable is something I may want to add later, however I have no ETA for that currently.

I have a question?

Should the forge version of NostalgiaGen not generate the config file?
(I want to change the swampland biome to plains because it looks closer to the beta grass color)

Unfortunately, the Forge version does not have a configuration currently

I can try to add it the next time I work on nostalgiagen.

Oh, that’s good to hear and will make the thing I am trying to do not take literall years Xd

Thanks for the quick reply by the way~

I’ve tried to get NostalgiaGen 0.5 to work, but I get this error every time. latest.log

This might be a stupid question, but is there any way for this to work with 1.10? I want this kind of world gen, but I also want to use the aether mod

Yes please we need it

Hello. I know this doesn’t belong here, but are you ever going to make a spigot version? I’d love to have a spigot server with this plugin! It’s simply amazing.