PermissionManager is a permission plugin with a lot of features to let the administrators controls the permissions and the groups on their server. Everything is thought to be as easy as possible for anyone.

Excelent plugin, i will try to use (PEX still too many complicated), but can you change the alias to other diferent of /pm because on my server /pm is an alias of private message.

No problem, I will change the alias of the command.

Cooldown permissions are extremely interesting. However this means that running /help will potentially trigger the permissions check.

In order for plugins to support this, they need to make dynamic permission checks, and NOT provide that permission to the Sponge commandSpec system.

I didn’t know the permission was checked when the player does /help.

I will look that.

Edit: I tested and /help test the permission of each command. I will try to do something to fix this.

How do i use command blocks?

You should be able to use a command block. What are you trying? 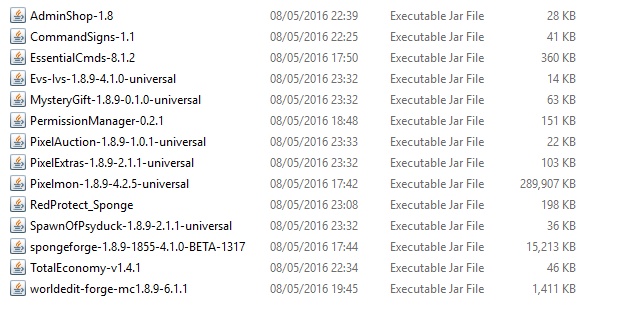 If you are the admin of the server, direct in the config file add this permission to your profil.

I set the groups.yml and players.yml - But as soon as the server starts, the files revert back to default - All the groups are gone, just default remains and the player list empties out.

Am I doing something stupid here?

Can I see your files?

I’ve been using your example page on the wiki as a guide - Just wipes the files back to what I’ve posted above… Even just adding the Admin group with the permissions of *, doesn’t seem to stick.

In the next update the files won’t be erased when there is an error.

To add the permission * you have to do this '*'

Oh, I didn’t even think to check the console - Yeah, there’s a few errors coming up.

So as you say, there was an error - but rather than run with it, it wiped / deleted my config files I’d setup and reinstalled the defaults