This time last year, the SpongePowered Project began from the seed of #NextStep on Espernet. That tiny seed grew to become the grand architecture of the Sponge Project we know today. We’re very thankful to the community for working with us over the past year to create this awesome project!

To give you the best possible overview, we’ve combined every project into a single visualisation: 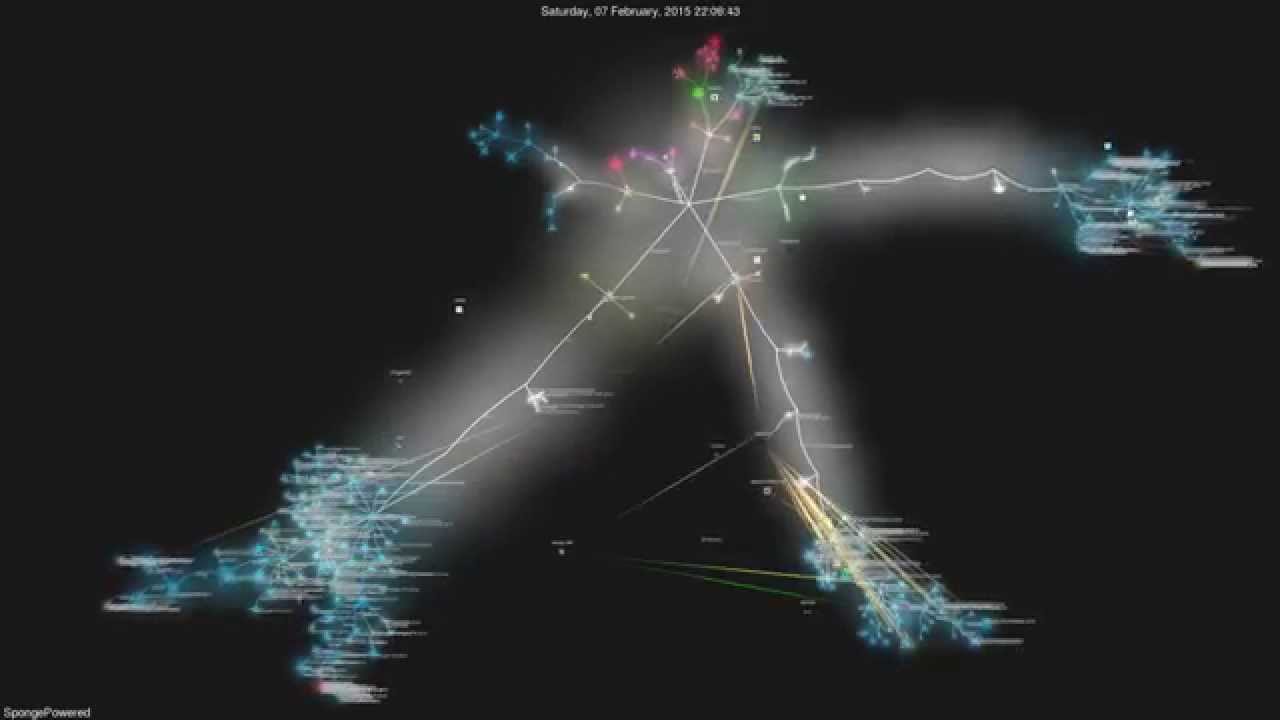 The SpongeDocs team have also been working on the Official History for those who would like to take a look.
[/spoiler] 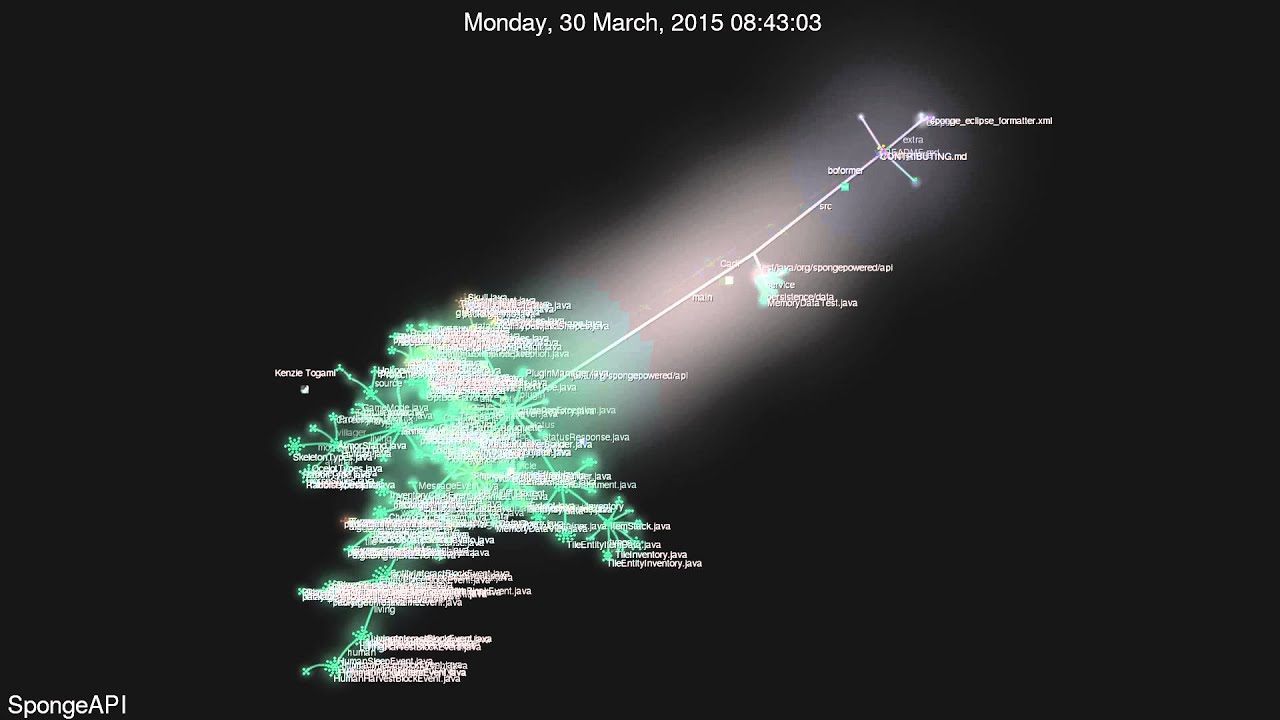 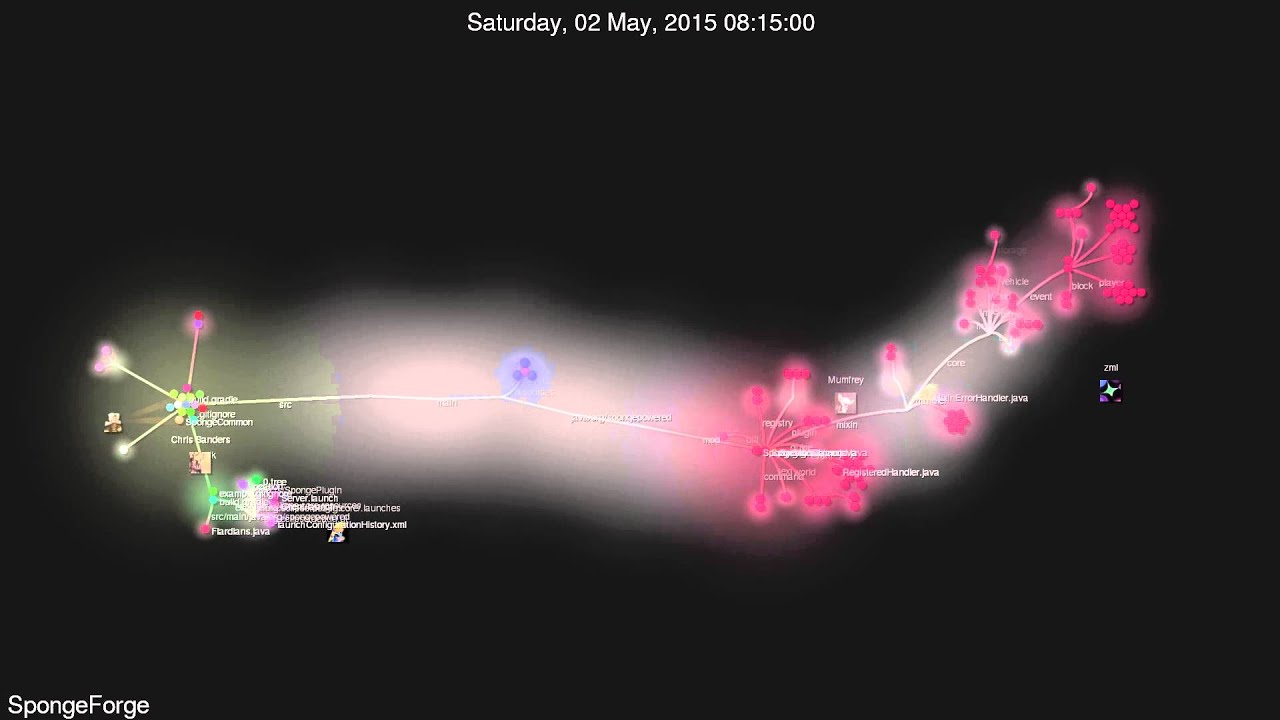 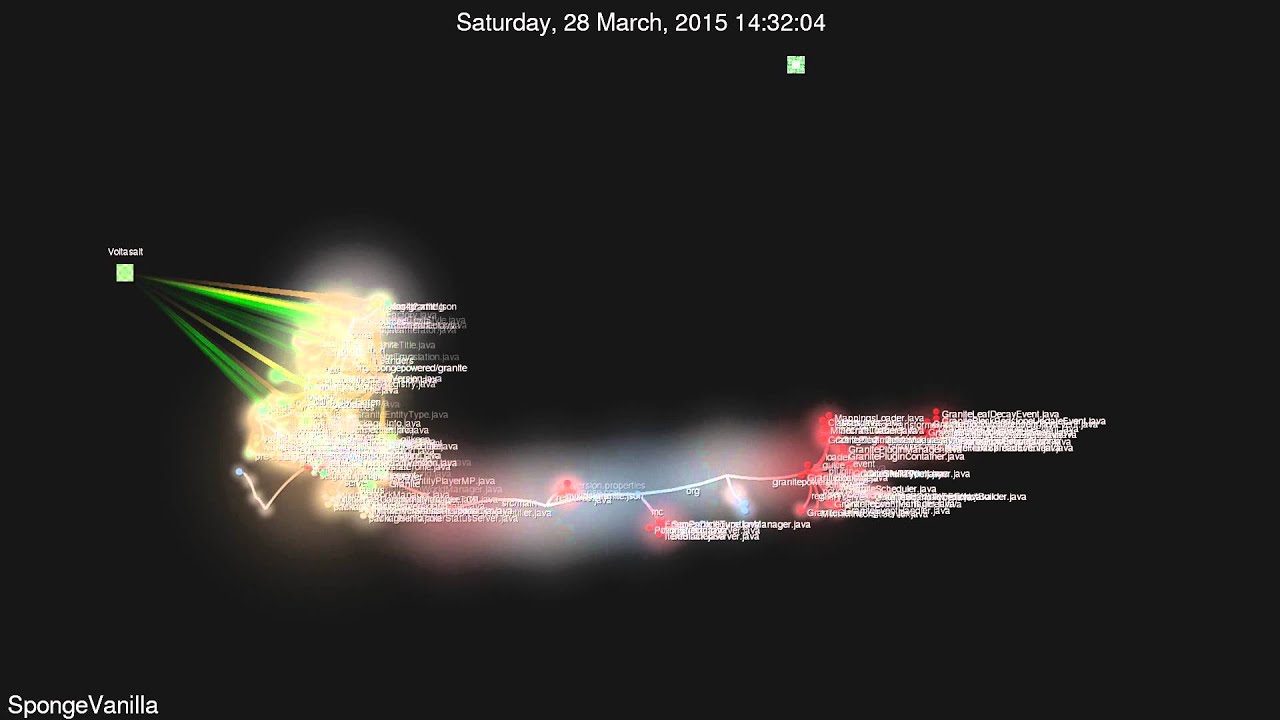 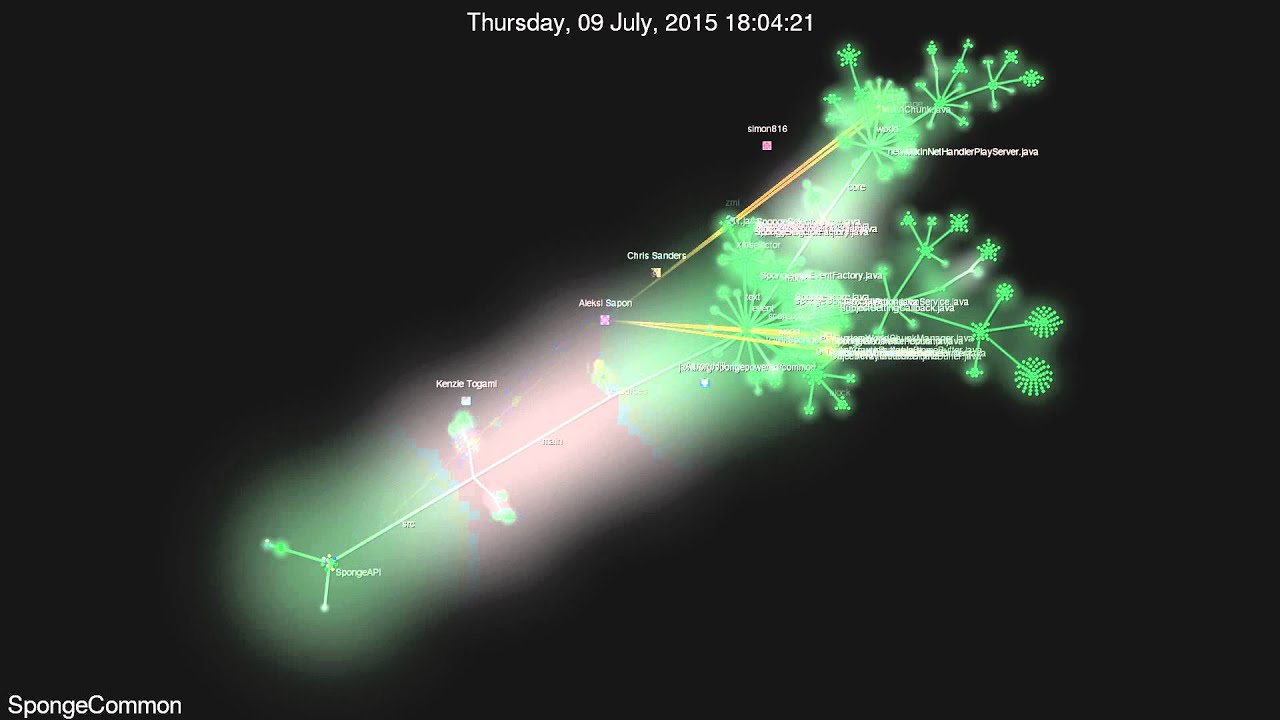 As you can see above, it’s been a busy month (and year for that matter). What started with @wizjany giving us feedback on our lousy event names (which I won’t argue on), ended up in one of the largest refactor branches in the project’s history. What started as a one man project by @Zidane ended up in a collaboration by many of us and equally as much headache and frustration on our overall direction. The decisions we’ve made regarding the design of the event system will have the longest effect on how the API is used and we’re proud of what we’ve put out the door.

Obviously we’ve broken a thing or three in 2.1-SNAPSHOT which the API is currently at. Starting with the official transition to a requirement of Java 8, we’ll be also bumping the API revision. We’ll remove all old builds as well but we’ll give everyone a good month’s grace period to update plugins for the change. Server admins, start updating your servers (or have your hosting providers do so).

Just as soon as @lukegb gets it up, I’m happy to finally announce SpongeVanilla dev builds. I feel she is stable enough so give it a whirl and let me know your thoughts.

Some may be wondering “You’ve got SpongeForge and Forge 1.8 takes Vanilla clients, what does SpongeVanilla offer me?”. SpongeVanilla is meant to be the cleanest implementation possible of SpongeAPI on Minecraft itself. It contains none of Forge’s capabilities to load mods which is both a benefit and a detriment. While SpongeVanilla loses mods, it remains slim and true to the Vanilla experience. If you feel Forge isn’t for you, don’t miss out on Sponge…SpongeVanilla is for you :).

Switching gears now, SpongeForge has been available for dev builds for a while and the feedback we’ve gotten has been amazing. @blood and crew have worked tirelessly on the product and the results are starting to show. I’m happy to announce that we are prepping for entering beta phase of SpongeForge. Internally, we have a series of tasks that herald the coming of it and some of those are focused on WorldGuard requirements such as:

As it stands, it’s a lengthy list but @blood is making serious headway on Sponge’s end and I’ll assist with anything that is common (all of the data) as that benefits both implementations. While we never give ETAs, I’ll go ahead and make the promise of entering beta phase by Christmas 2015.

Great, how can I help you fulfill your promise?

While the usual docs shoutout can be pasted here verbatim, we need people to tackle and complete each data manipulator. If you are also willing (and, in SpongeForge’s case, brave), we seriously need help with getting all of the events firing. Talk to @gabizou to see what you can do for data or @Zidane / @blood on what to do for events. Lastly, we’ll be reaching out to have people do more intricate testing of it so be on the lookout for future posts.

After some general streamlining (thanks @Tzk), we now have room for a heap of new things to be added. This includes the recent Event Refactoring, transition to Java 8 (when it hits the repo), and many more. We’re also trying to make it easier for contributors to help SpongeDevs write DataManipulators - as soon as we finish the doc explaining how.

Many thanks to @Zirconium for keeping things ticking along, reviewing, and generally being nice. Sadly, the Data API docs (WIP) were a casualty of the massive changes (sorry, @Saladoc). We’ll need to start again with Data docs using the restructured Data 2.0 API.
There has been much useful feedback from the regular Docs Quiz; thank you to everyone who has provided grist for the mill. We hope to address many of the things discussed there soon, maybe even including the fabled changelog.

Some unused and unloved languages were trimmed from Crowdin, and in a bizarre twist, UK English has been added for the linguistic purists. We are hoping to get English set as the default language for SpongeDocs soon. May the FLARD be with you. 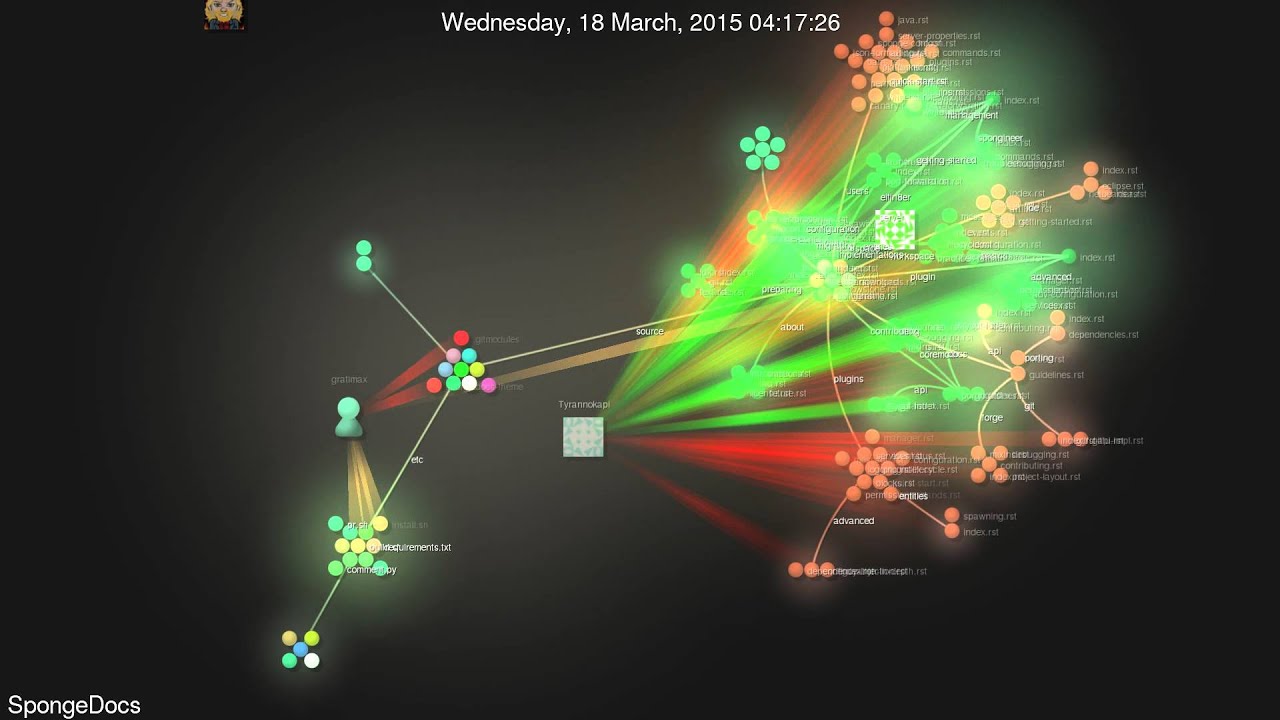 As always, we will be having a Q&A session, be sure to post any questions you have below, or tweet them with the hashtag #StateOfSponge, the more questions you have, the better! We will also be running a demo server with plenty of plugins for everyone to play around on, we’d love people to join us and help test everything. We hope to see you there!

I must say, our first year has been one wild ride. We’ve had our ups, downs, and everything in-between. We’ve hit many roadblocks yet the wheels keep on turning. We hit slow periods just to fire back with a month like August. While some people have since departed, others have hopped aboard and we’ve never been better. I could not be more proud of what this team has accomplished over the past year nor more thankful of the wonderful community that has stepped up to give us its’ support. I look forward to the upcoming year and beyond.

Happy anniversary everyone! I know for a lot of us it’s going to be our first cakeday too! (mine being tomorrow)

I got my anniversary Badge!

Such a Great project, so glad to be here on the anniversity of sponge. It’s nice to be here almost since the beginning.

Been following this since the beginning too, but was to lazy to join irc and the forums first…
But i’m glad i finally made it.

Keep it up guys!

The progress has been astonishing and it is honestly showing the true potential of the project(s)! Keep up the great work guys!

Yay Beta! I can’t wait xD
Oh man I have been inactive for quite a while lol.
Anyway the project is coming along very nicely and I’m looking forward to all the things to come ^^ 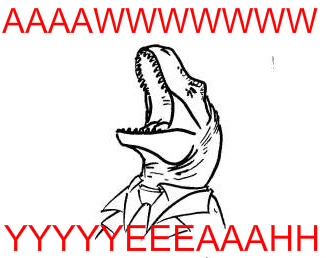 Sponge has come a long way. When the first build was publicly available, I was able to see how the genius('s) behind the project, was able to get the system built, and comply with licencing laws.

Is there a downside with sponge for me? Yes. Only because all the mods I love to use, are still only available for 1.7.10. I know why 1.8 was chosen. When minecraft updates to 1.9 most, if not all of the mods will have updated, or begin updating to 1.8, at which point there will be a sponge version available for modded server owners like myself.

All in all, you guys are doing a great job, keep it up.

Great Job guys - thanks a million

Just as soon as @lukegb gets it up, I’m happy to finally announce SpongeVanilla dev builds. I feel she is stable enough so give it a whirl and let me know your thoughts.

Happy to know it’s a girl

This was decided long ago:

The history of Sponge and Spongie. Fixes #262

-add art asserts page -add history page -mention Spongie on history page I'm no…t sure about the gender/genderlessness of Spongie. Used masculine form for now because "don't make it cry" sounds weird to me. this is still WIP.

This is fantastic news.

I’ve been following since i Joined Oct 9, '14 - finally making my first post… can’t wait to see what sponge is like.

It has been a fun first year.